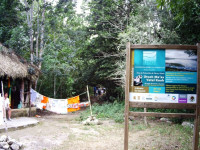 Punta Laguna (animal reserve)
Punta Laguna is part of a 5,000 hectar, government-protected nature reserve called Ma'ax Yetel Kooh, which is Mayan for "House of the spider monkey and the puma" In addition to the unique subspecies of spider monkey that inhabits the area, the preserve is also home to howler monkeys, pumas, coatis, jaguars and a variety of birds. 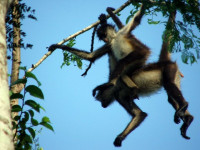 The name Spider Monkey comes from the ability to use its prehensile tail to hang from trees. The Howler monkey can swell his larynx to form a natural amplifier, allowing its cry to be heard as far as 10 km (5 – 6 miles) . Group size is limited to 10 people so as not to frighten animals and to minimize the disturbance to their habitat. Not only are the guides knowledgeable as natives, but a research team of primatologists has provided them with more specific training regarding the wildlife.
As you head into the jungle, you are actually hiking on a pre-hispanic platform (sacbe) that is often obscured by vegetation. Despite the thick jungle growth, there are several spots where temples and the tops of pyramids can be clearly seen. Most of the ruins are from the late classic to post-classic periods, around 700 to 1000 A.D., and are in the same condition like Chichén-Itzá and Uxmal when they were .discovered.

We have 38 guests and no members online